Ann Coulter recognized the political activism of fat folks in a series of tweets regarding the response to the 2016 US Presidential Election: 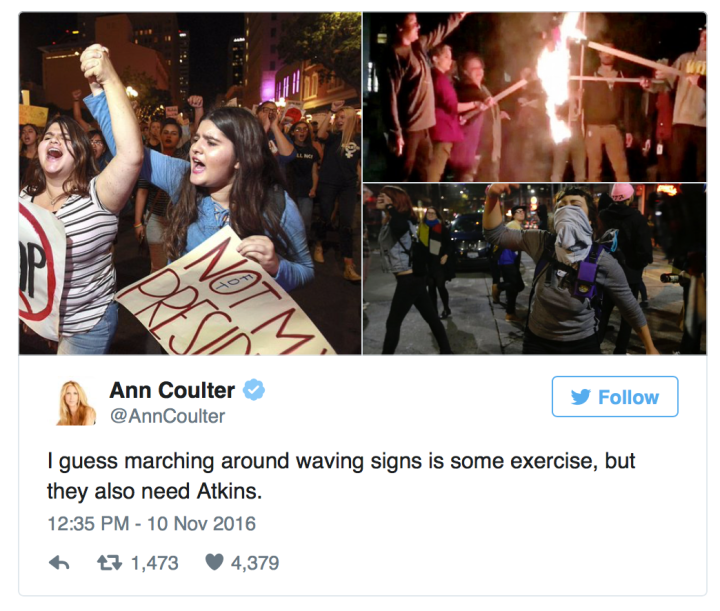 You can read more about the protests and see some of the responses to Coulter’s tweets in this CBS article here.

It wasn’t surprising to me that these tweets received a lot of backlash. There are two aspects to this backlash that I think are important to note: how uncomfortable people feel when we acknowledge that someone is fat, and that we can depend on fat activist communities to provide insightful pop culture commentary in response to fatphobic incidences.

Many of the responses to Coulter’s tweets referred to her comments as cruel or hurtful. That is because being fat is still regarded as an undesirable embodiment; the fat body is still largely considered abject, unproductive, and out of control. To people outside of fat activist communities, being called fat is an offensive term akin to racial or misogynistic slurs.

However, fat activists are not immune to the effects of fat stigma despite their political activities. Kathleen LeBesco, in her book Revolting Bodies: The Struggle to Redefine Fat Identity, argues that fat activists often take on the ‘will to innocence’:

“Ridiculing a fat activist who proclaims that fat people are on the march for rights in record numbers, American Spectator writer Mark Steyn simpers, ‘If only. Alas, she was speaking metaphorically. But fat people are on the drive, wedged behind the steering wheel with a couple of Twinkies for the road and heading straight for the latest fat rights demo, with a quick stop at the drive-thru Dunkin’ Donuts.’ Certainly, Steyn’s inflammatory rhetoric warrants some response; but beware the impulse to saint fat people in order to protect them from the barbs of Steyn and his compatriots.

Fat activists of the assimilationist stripe typically respond to such charges by deploying a rhetoric of innocence which seeks to relieve them of responsibility for their much maligned condition,” (LeBesco, p. 112).

This means that sometimes, fat activists seek to justify their fatness in socially acceptable terms. This includes acknowledging that one’s fatness is a symptom of a disease or socioeconomic status, or when a fat person aims to prove that they are both fat and physically active. The ‘will to innocence’ is something I also touched on in my previous blog post, in regards to some of my concerns about my documentary that involves fat people engaging in physical activity.

We see the ‘will to innocence’ employed in both the general public response to Coulter (‘how dare you say that! You don’t know these peoples’ circumstances!’), and in the defensive nature of some fat activist responses.

However, I was quite inspired by some responses from the fat activist community. Blogger Kiva Bay presented a thoughtful and humorous response to Coulter’s tweets (and yes, another fat stereotype is that all fat people are funny):

… It’s weird that the most recognition fat women activists and protesters will likely get in all this will be from Ann Coulter. How did she know? Has she seen the late 70’s Fat Underground video? How did she know, when so many have tried to erase our contributions, that it’s not really a protest until a fat girl shows up? (It’s the law, look it up.)”

As one Toronto-based fat activist and performance art collective claimed, we are Pretty, Porky, and Pissed Off. And while I was pissed off to see that most responses to Coulter’s tweets were people who were horrified that she dare call someone fat, I continue to be motivated by various people in fat communities who simply responded: “Yeah? So what.”

To echo Kiva Bay, Coulter ain’t seen nothing yet – this is just the beginning.